The Telltale story of the Ajrakh

For an archaeologist from South Asia such as me, what could be a more precious discovery than the Priest King of Mohenjo-Daro! Archaeologists have been debating on his role and position in Indus Valley society, but for those who are inclined towards aesthetics and art they are fascinated with his shawl depicting trefoil patterns interspersed with small circles – the fusion of three sun-disks of the gods of earth, water and the sun. That is Ajrakh, South Asia’s oldest textile tradition of block printing.

5000 years later the tradition still prevails in Sindh and the artisans still use the same methods of production that were used in the days of the Indus Valley civilization to create an ajrakh fabric. Ajrak is derived from the word Azrak, meaning blue in Arabic as blue happens to be one of the principal colours used in Ajrakh printing. 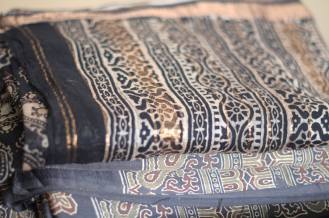 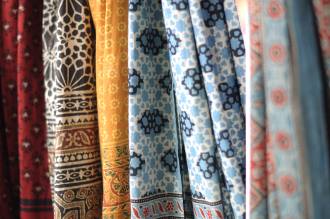 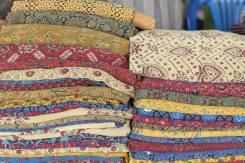 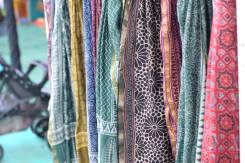 The Raos of Kutch had invited a group of Sindhi artisans to Kutch for introducing the art in the region. They first settled in a village called Dhamadka near Bhachau, the epicenter of 2001 earthquake. 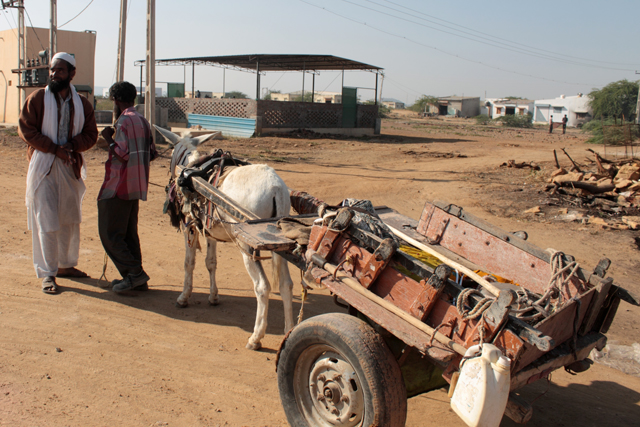 Dr. Ismail Mohammad Khatri, the man behind the successful revival of Ajrakh printing using natural dyes, told us about the context of their arrival in Kutch while introducing the art and the significance of blue colour

The indiscriminate cultivation of Indigo in Bihar and Bengal affected its production in Kutch. In 1840s, organic colours were introduced in Europe – indigo for blue and alizarin for red. These were produced in industries on a large scale replacing the organic colours and lowering the cost of fabric. Eventually the Kutchi farmers forgot the knowledge of organic dye production and instead used the cheaper but hazardous European synthetic colours.

Ajrakh printing is a long process involving different stages of printing and washing the fabric over many times with various natural dyes and mordants such as herda, lime, alizarin, indigo, tamarind paste and even camel dung. 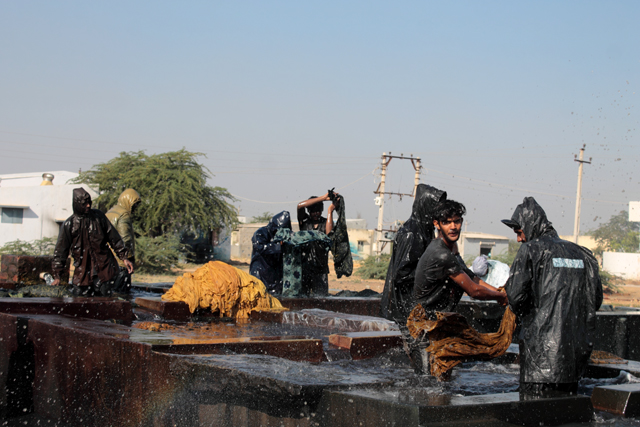 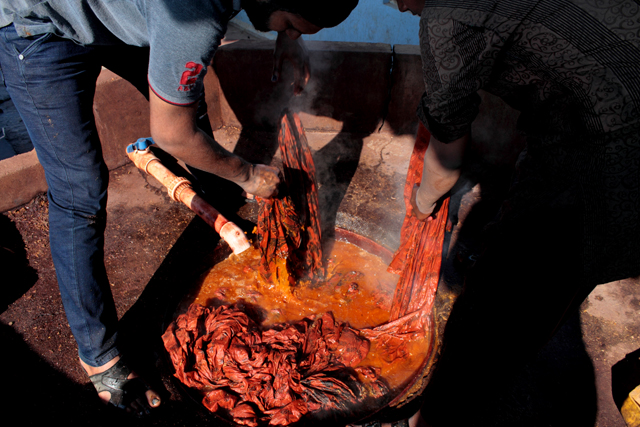 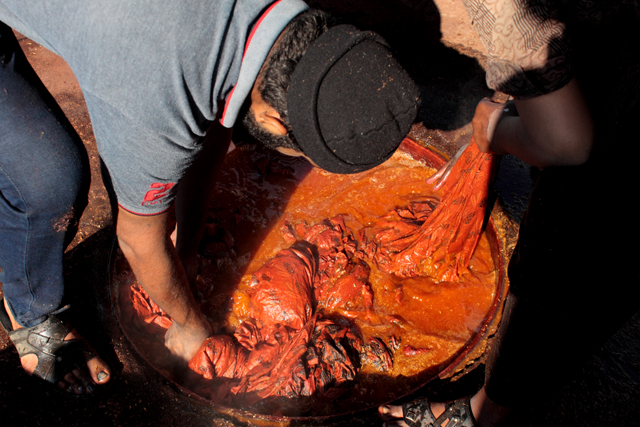 An ajrakh fabric is usually about 2.5 to 3 m in length. The printing on the fabric is done by hand with hand carved wooden blocks of various designs. A number of wooden blocks depicting different designs are used to print repetitive patterns, the characteristic feature of ajrakh. These blocks are made by synchronizing the patterns perfectly. Making these perfect blocks is indeed a huge challenge. 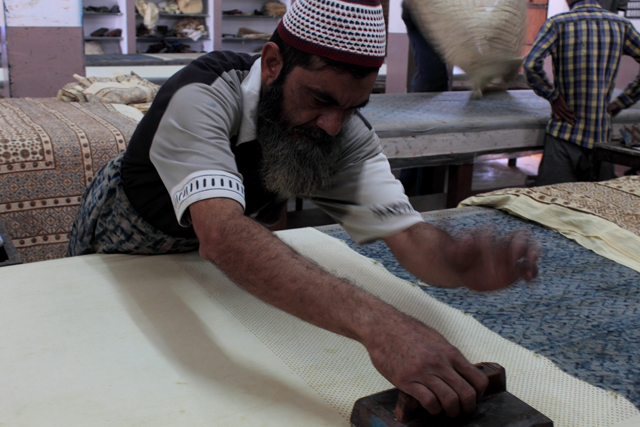 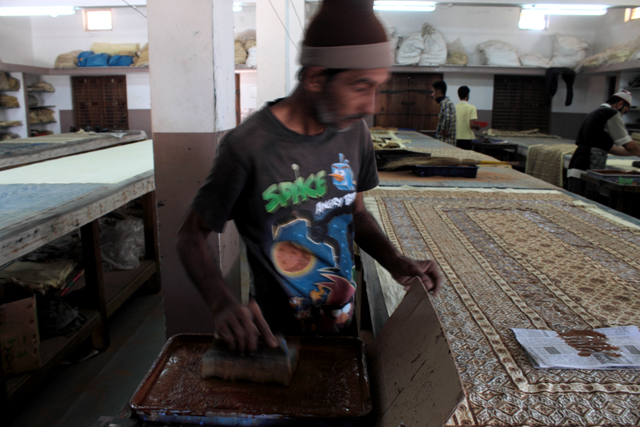 Ajrak print is done within a grid, the repetitive patterns creating a web-like design. Borders are then added employing specific designs. These borders are aligned both vertically and horizontally and frame the centre, separating one ajrakh. 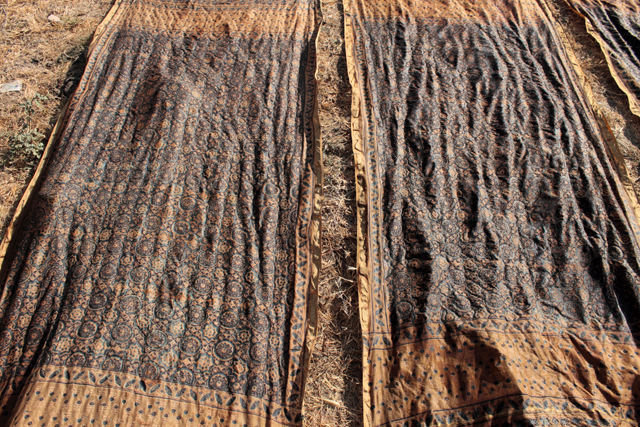 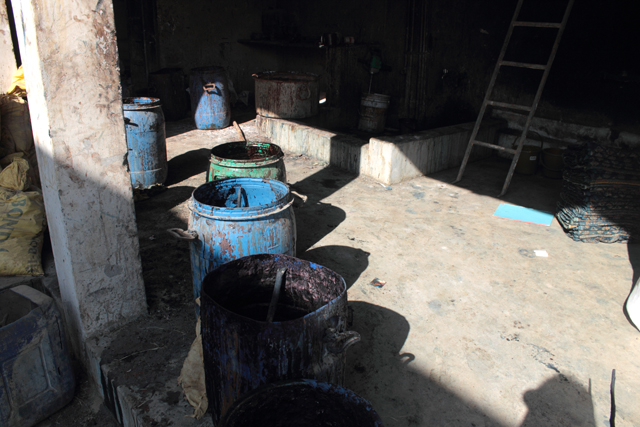 Once the printing is done, it is left for dyeing. The process is repeated time and again with different kinds of dyes to eventually achieve the final desired pattern. It is a very labour intensive and time consuming process taking upto two weeks to create a single piece with an eye-catching print.

In this entire process the role of water is critical. There are 30 steps through which an ajrakh fabric passes and each step involves washing. The water influences not just the character of the fabric but also its colour and shade.

Dr. Ismail Mohammed Khatri is an institution as far as Ajrakh printing is concerned. He traces the origin of his community to a village called Santreja in Sindh. In the 16th century during the reign of Rao Bharmal I, JindaJiva, his ancestor was the first artisan to settle in Dhamadka in Kutch. In the video, Dr. Khatri traces his journey from being an humble ajrakh artisan to a PhD on the subject.

The river adjacent to Dhamadka village provided regular and easy supply of good quality water for ajrakh printing work. But after 1991, the river started drying up resulting in the lowering of water level in tanks and wells of the area.  The2001 earthquake destroyed the village itself forcing Dr. Ismail Khatri and others to migrate to a new place. How did it happen – watch the video to know what challenges were faced in the settling of the village of Ajrakhpur.